BACK TO TIP VAULT
Put stories away, to sit in the dark


The joys of inventing a story
- Tip - 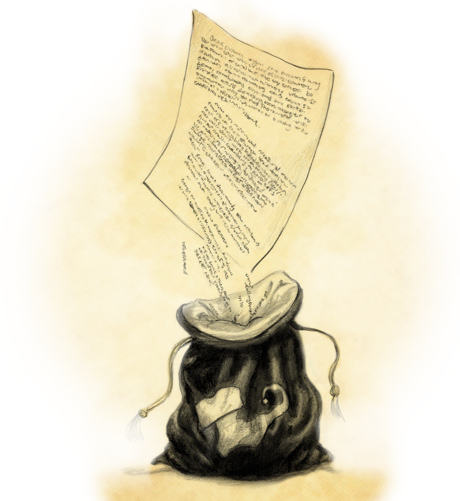 When Joble, the editor elf, first read the fairly tale The Waking Prince, he suggested changing the order of the story.  Joble suspected that an event I wrote into the beginning might sound significantly better at the end, and an event I wrote in toward the end might be far more dramatic if moved to the middle!

There was a opportunity to improve the story if I was willing to reorder some of its pieces.

When we write things down, when we see ink soak into paper, it is easy to think that the words are attached, permanently fixed, even glued to where they first appear!  But this is not so.  Each piece of a story—from a single word to a sentence to a paragraph—can be  picked up and relocated.

And, as Joble reminded me, each story piece that is thoughtfully moved can end up changing the story as a whole.

New idea:   If you look at a story you have written and the words seem strong, the events very interesting, but somehow the story falls short of your expectations, try this.  Imagine turning your pages to the side and sliding all that they contain into a velvety soft bag.

Then, using your imagination, reach in and pull out pieces of story, one by one.  As you regard each piece, think about what the story might sound like if this or that event was placed somewhere new.

For example, let’s say you have written a story about a fishing trip.  You tell your reader about packing up your supplies, about a long walk to a small lake, about launching an old rowboat.  Brilliant blue dragonflies are passing by, the surface of the lake is perfectly still, and then your line goes taut.  Something has taken hold of the other end!

But, what if you began this story with the moment when something took hold of the line?  You could introduce this dramatic moment early, catch your reader’s attention, and then go back and tell about how you came to be sitting in a rowboat on a small lake, with dragonflies zooming by.

Moving story pieces requires time.  However, sometimes this is precisely what the story needs:  a reordering of the things inside.