BACK TO TIP VAULT
See pictures when you write 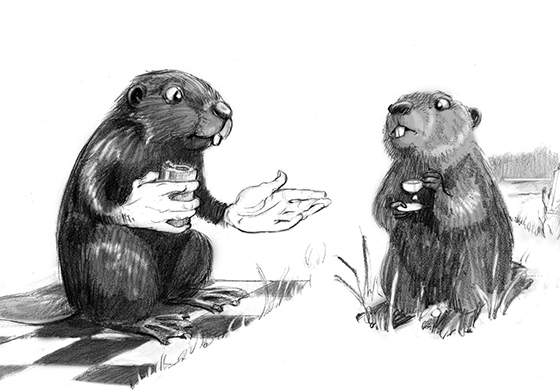 Words are what make a story.  Literally!  And there is some Word Magic that elves practice in every story:

when a story’s first words are chosen with great care, these words attract other ideal words that fit the story perfectly.

I can explain with a short story.

On a chilly Monday, Mrs. Moore asked everyone in her fourth grade class to begin a fictional story with beavers as the main characters. Writers were to draw inspiration from a recent field trip, when the class boarded a bus and wound their way up a mountain to a stream where they could see the curious, industrious lives of wild beavers.  Each person saw with his or her own eyes what beavers look like, how beavers live and how they tinker with their environment for their own intricate purposes.

The sights, sounds, feelings, impressions and even smells collected on this day were now to be funneled into fictional stories!

But, the setting for the stories was still to be authentic, and the beavers were to be created in the image of real beavers— wet, waddling, and beady-eyed, without exception!

To get the Word Magic swirling in the classroom, writers began to think of excellent Beaver Story words.

Lists of words were made on a chalkboard before anyone even started writing.

The lists of words got longer and increasingly more precise and poetic.  Writers called out words from every direction.  Then the writers quietly regarded the lists and got started.  After only a few lines were drafted, writers were invited to share their work.

We all listened closely.

There were just a handful of words that we all agreed should go, words that sounded out of place.
– One beaver had hands.
– One held a soda pop can.
– One walked on the floor.

These were quick and easy changes!
– Hands became paws.
– The can of soda pop became a mug of tea (which, we all agreed, sounded more like what an old, stodgy beaver would hold).
– And the floor became sodden ground.

Everything beaver was kept and everything un-beaver was stripped away, right away.

New idea: When you begin writing a story, consider your setting and your characters, and begin choosing your FIRST words with great care.  Making word lists can be enormously helpful in getting started.

Edit your story early—even after just a few sentences are written—and look particularly closely for words that somehow don’t fit.  Erase and replace!

When you choose your first words with this kind of care, these words will give rise to so many other ideal words throughout the rest of the story.