In a previous tip, we learned about the-importance-of-a-characters-eyes.  The appearance of the eyes defines a lot about how we relate to a character.

Another important decision is where the eyes sit, and where the pupils sit.

Let’s start with this character, a normal healthy young chap. 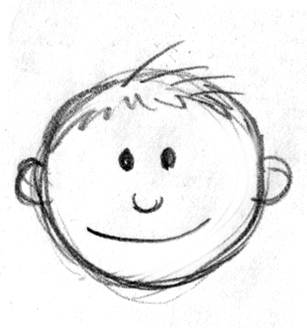 If I move one eye just the slightest bit, he looks odd.  Because our elven and human brains are wired to recognize symmetry in faces, we see that slight change as a glaring weirdness. 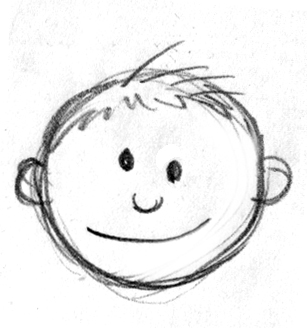 Now we can see the whites of his eyes and  exactly where his pupils sit. Right now, his pupils are facing the same direction, as you would expect. 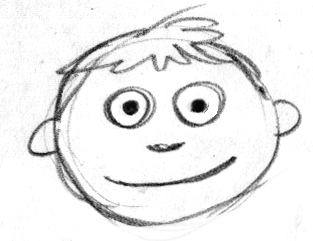 But, if we point them in opposite directions, you get the classic googly eyes. This implies a goofiness to the character, in most cases. 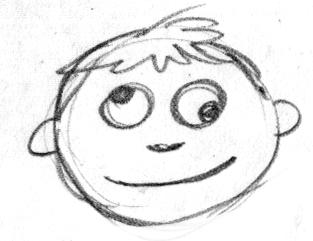 If we were to make the change less drastic, you get a different effect. 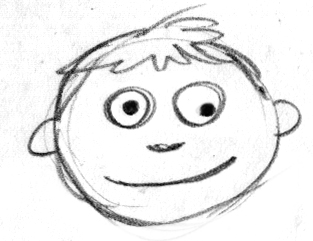 Now the poor guy looks like he has something wrong with his eye, or like he’s just slightly off. We can use this to our advantage to suggest a character who may be off balance in some way.

Eye and pupil placement come into play when creating animal characters especially. Humans and elves have forward facing features.  Our eyes face straight ahead. Take a minute to compare this to a chicken, whose eyes are on the side of its head….

You see how different you are from chickens?  The difference is even more noticeable in profile, when you see how forward human eyes are.  Chicken eyes look perfectly centered on a chicken’s head in profile!

By adjusting a chicken’s eyes to sit like a human’s eyes, we’d have to have them face forward.

By doing so, we start to relate to them and see them as a character… rather than any old chicken.

This same principle works for most non-predatory animals, like cows.

Cows and chickens—both being prey species—have eyes in a position to see the predators who may want to come eat them. Humans evolved as predators, so your eyes aim straight ahead to see your prey and track it as you chase it.

And predators tend to be easier to make into characters. 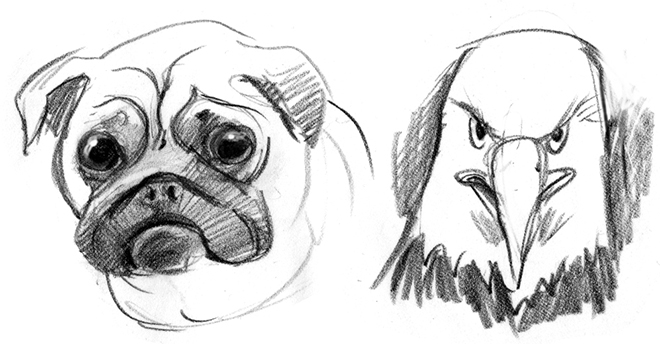 Believe it or not, these are pretty faithful sketches of a pug (which is a dog, a predator) and an eagle (a big time predator). These characters already seem to have personalities we can relate to, without me changing anything about their eyes or other features.